Most of what gets published in the financial media separates investors and companies into two camps: Value and growth. But that doesn’t make any sense. It was Warren Buffett who said, “Price is what you pay. Value is what you get.” The way I read it, that means any stock can be a value investment.

That’s especially true when you find companies that are both growing fast, and generating profits. It’s a rare combination. And it’s why I think Upstart Holdings (NASDAQ:UPST), eXp Worldwide (NASDAQ:EXPI), and The Trade Desk (NASDAQ:TTD) are the best stocks to buy as the market sells off. Here’s why. 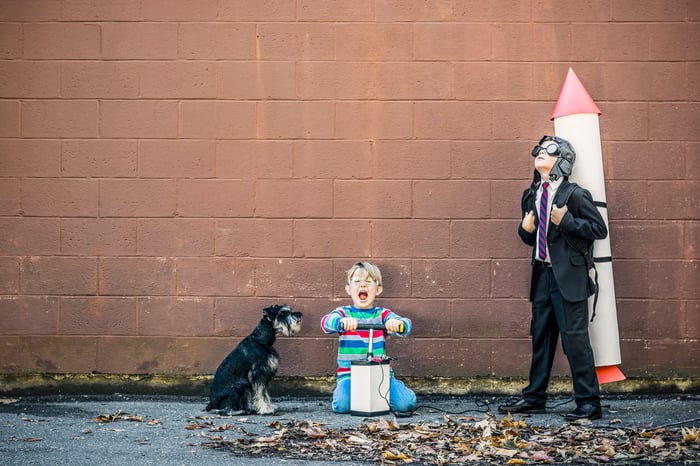 Small banks and credit unions have been rapidly deploying Upstart’s machine learning-based lending product. And it has gotten Wall Street’s attention. For the first six months of 2021, revenue climbed nearly 300%. And the stock is up 15-fold from its $20 initial public offering (IPO) in December 2020.

Part of the allure is the fact that the company keeps blowing the doors off analysts’ expectations. And it’s generating increasing profits. The company’s operating margin has been growing since going public, setting aside the effect of the pandemic in the second quarter of last year.

Both revenue and profits are likely to keep getting bigger — a lot bigger. Not only is its initial product — focused on the $84 billion personal loan segment — growing fast, it is moving into the $635 billion auto lending business and making overtures toward the estimated $4 trillion U.S. mortgage market. Don’t let the run-up in the stock fool you. Upstart could have a lot more growth in the future.

Many are aware that the real estate market is slowly being disrupted. However, most think the biggest threats are from the technology-based services of Zillow Group (NASDAQ:ZG) and Redfin (NASDAQ:RDFN). A lesser-known player is taking share in a more traditional way — by incentivizing agents.

eXp World Holdings is attracting the best agents by offering them a fully digital workplace and a cut of commissions that is hard to beat. Where traditional brokerages might take 30% out of all gross commission from an agent, eXp takes only 20% on the first $80,000. After that, 100% of the commission goes to the agent. If you’re a high-producing agent, it’s almost irresponsible to work for another company.

That’s not counting the equity. The company also incentivizes agents by giving them the option to take some of their commission in stock — at a discount. It also gives them shares when they reach certain milestones, as well as when an agent they recruited to eXp makes a sale. It’s no wonder growth is off the charts.

For the first six months of 2021, the company reported revenue and net income growth of 153% and 400%, respectively. It also had 87% more agents and brokers than it did at the same time last year. It’s been expanding internationally too, targeting growing economies like India, as well as some in South America and Europe. Although the stock has climbed 139% in the past year, it looks poised for continued growth in the years ahead.

The Trade Desk went public in September 2016. Since then, it has seen revenue and profits explode higher along with the stock price. Shares are up 2,300% since that initial public offering, trouncing the S&P 500 index. 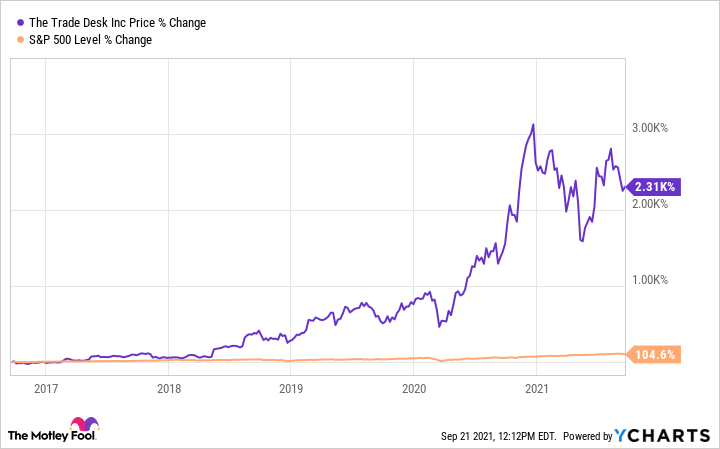 That’s because much of the world of advertising has moved online. The Trade Desk’s digital platform lets ad buyers create, manage, and optimize their campaigns. It automates the process across virtually all formats and channels, from social media on a smartphone, to display ads on a web page and streaming services on connected televisions.

Its latest product — Solimar — is a cloud platform that allows marketers to prioritize objectives, manage elements like analytics and data privacy, and connect to a marketplace of partners. The company believes this will enhance its competitiveness in the digital ad space.

In the first six months of 2021, revenue climbed 67% over the same period last year and 78% over 2019. That’s an important comparison given the effect of the pandemic in last year’s numbers. Net income jumped 85% over 2019. Shareholders have gotten used to that. The company has reported a profit every year since 2014 — the first year data is available.

As more of the advertising world moves to digital channels, expect the company to continue innovating and delivering high sales and profit growth. That’s why regardless of any sell-off, I think Trade Desk is one of the best growth stocks to buy now as a long-term investment.