It’s day 11 of the electoral campaign, and we expect both main parties and other electoral candidates to hold events to detail further pledges ahead of the March 26 general election.

Spotted something worth noting? Get in touch at newsroom@timesofmalta.com

Robert Abela does a runner

7.28pm Prime Minister Robert Abela slipped away from journalists covering the inauguration of a new SR Technics hangar this evening.

A communication aide claimed SR Technics does not allow “political questions” on its premises.

Journalists nonetheless attempted to get a comment from Abela, but the Prime Minister managed to slip out through a side door.

7.18pm Addressing the PN event in Qormi, independent councillor in the locality George Muscat, who is now contesting the election with the PN, said he wished to return to the PN also as a councillor.

Muscat had gone independent after feeling that he had been sidelined by the party. He said on Thursday he used the time to reflect and appreciated the support he had found by members of the party.

Opposition leader Bernard Grech welcomed his announcement and told Muscat “welcome back to our family”.

Watch it in the video below.

Debates to give women a voice

5.50pm The Malta branch of the International Federation of Business and Professional Women said it will recognise all female candidates, giving them visibility and a voice through four debates.

They are being held at Malta Fairs & Conventions Center in Ta’Qali on Friday, Monday, March 10 and 14. They will start at 2.30pm and each will last for 1.5 hours.

5.15pm Following Wednesday’s pledge that teachers will see a significant improvement in their conditions of work, Prime Minister Robert Abela on Thursday met the teachers’ unions making a series of commitments.

These include a move towards an education system “where homework is not required”.

The prime minister also promised to install air conditioning in all schools across Malta and Gozo, an “extensive investment” in modernising classrooms and a “strong” infrastructural investment in schools.

He committed to a “national level” debate on homework and students’ free time.

“The country has to move towards an education system where homework is not required.”

3.55pm The PN’s afternoon press conference dealt with housing with the party promising to build 500 new social housing units every year in a bid to tackle long waiting lists for accommodation.

Party spokesperson Peter Agius and candidate Ivan Bartolo said this would be done through public-private partnerships.

Any developer who meets their environmental, sustainable and good governance obligations will be welcome to join the scheme, with the number of units being achieved through a mix of new public housing projects as well as leasing from the private sector.

Read about the proposals here.

2.40pm Nominations for the election have continued to trickle in with the Electoral Commission saying that the following names had been submitted by 1pm. 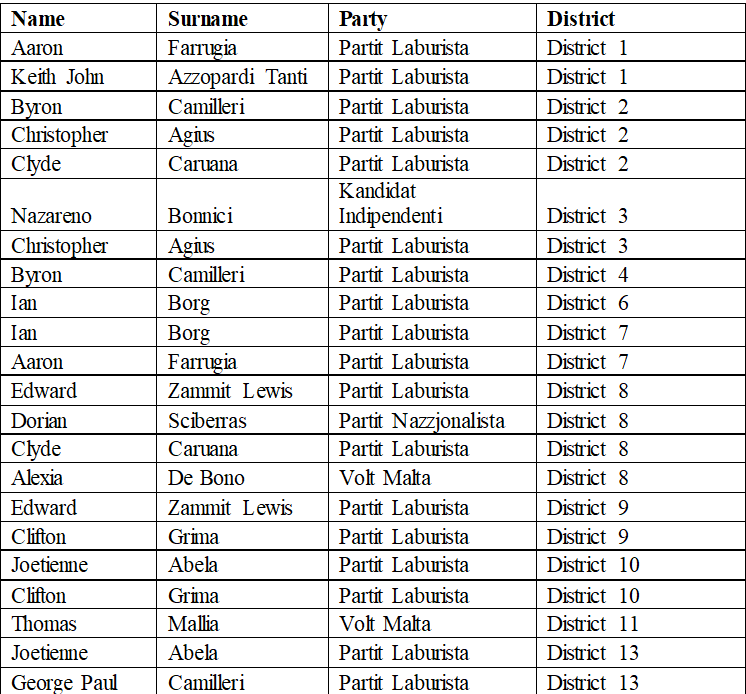 The nominations received by the Electoral Commission by 1pm.

2.25pm The Labour Party has just issued a statement dismissing claims that traffic directional signs were pulled down to make way for promotional party banners. The road signs were in fact removed late last year. Read the story here.

2pm The Chamber of Commerce has just handed Grech a document with over 100 proposals for a new legislature.

These are five of their asks:

You can read about the rest here.

‘Who are the PLPN passport scheme agents?’

1pm ADPD – The Green Party, which has repeatedly called for the scrapping of the ‘golden passports’ scheme has taken its request up a notch.

It is urging PN and PL to say whether any of their electoral candidates are passport agents. None of ADPD’s candidates is associated with the passport sales scheme, its chair, Carmel Cacopardo said.

The party went on to suggest that since some of those in possession of a Maltese passport through the scheme could be a security threat, the details of these new citizens should be passed on to Interpol.

12.30pm A press freedom institute has slammed a PL billboard depicting Grech with a host of blurred images of PN MPs and blogger Manuel Delia hovering over his head. The words ‘Bernard is a face of the past’ were printed across the poster.

The International Press Institute said the demonisation of journalists and bloggers on political billboards was unacceptable and the same had been done to Daphne Caruana Galizia in 2013.

All roads lead to Robert Abela

11.30am Motorists on the multi-carriage road in Marsa might have noticed that traffic signs have disappeared and a long banner with the Robert Abela 2022 logo on it appearing in their stead. 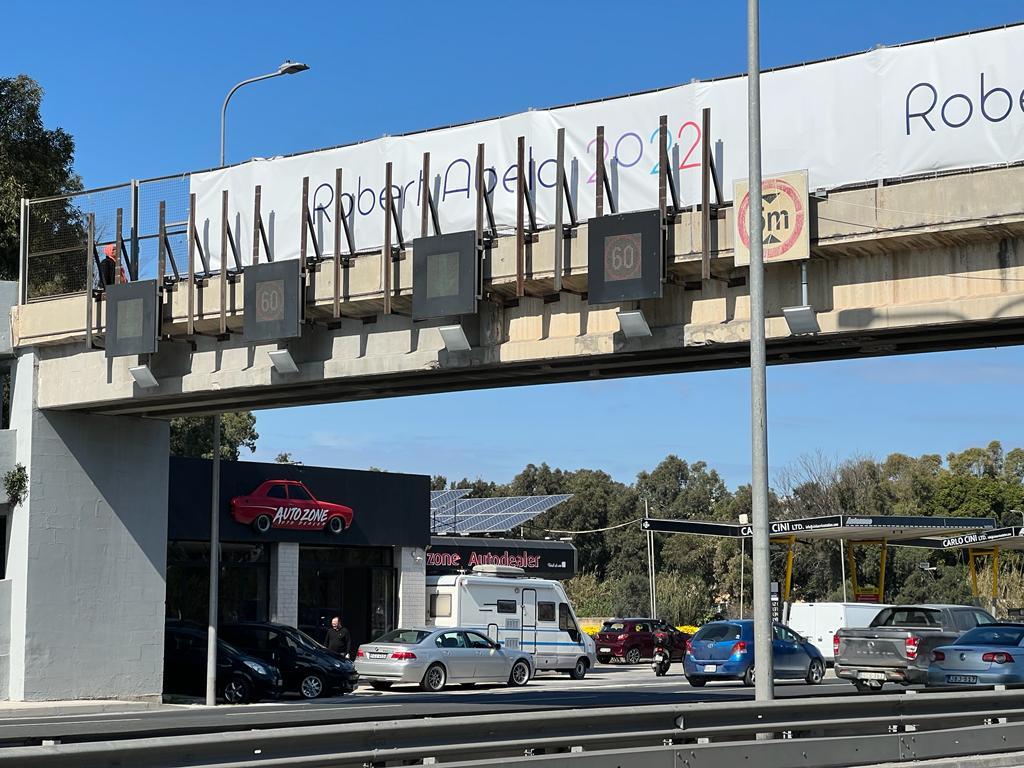 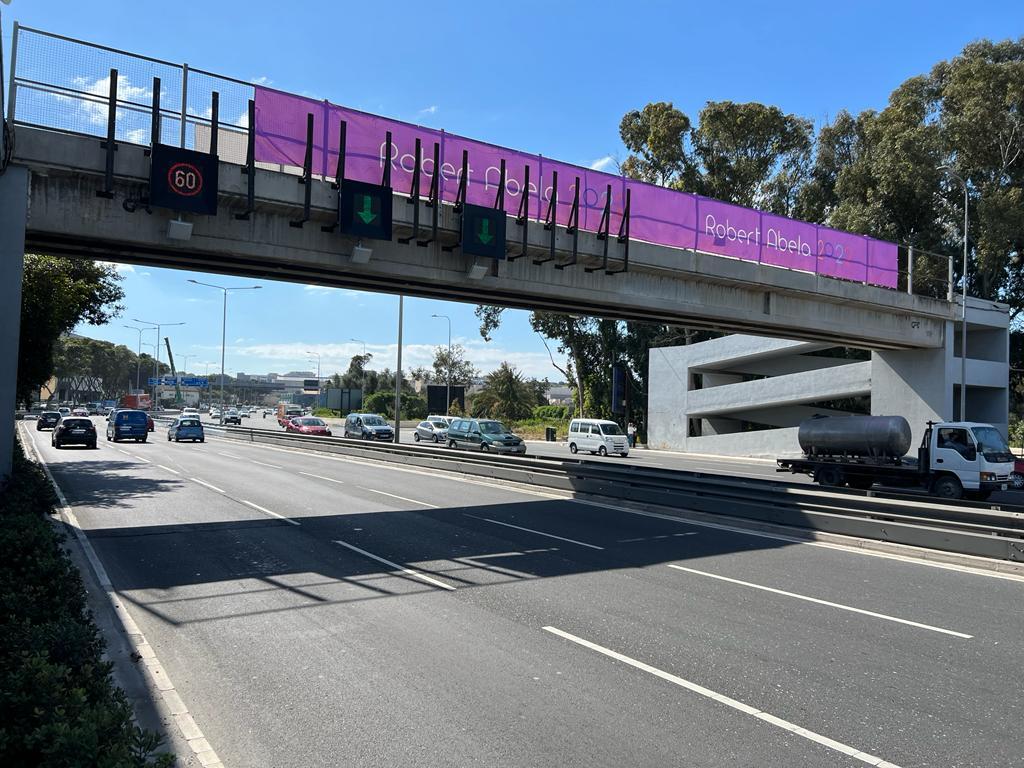 11am Earlier we told you employers were going to launch their pre-election recommendations.

Topping their list is an appeal to politicians to clean up their act, following a legislature thatwas “rocked” by a series of scandals.

They are also calling on the new administration to take stock of the social, economic and moral direction of the country and ensure the prosecution of those involved in corrupt practices.

Meanwhile, they suggested changes that would halt public sector recruitment six months prior to an election.

9.30am The first 21 candidates have officially thrown their hat in the ring and it is worth noting nearly all of them are men.

Also, all of them, with the exception of Volt Malta’s Thomas ”Kass” Mallia, hail from the two main political parties. 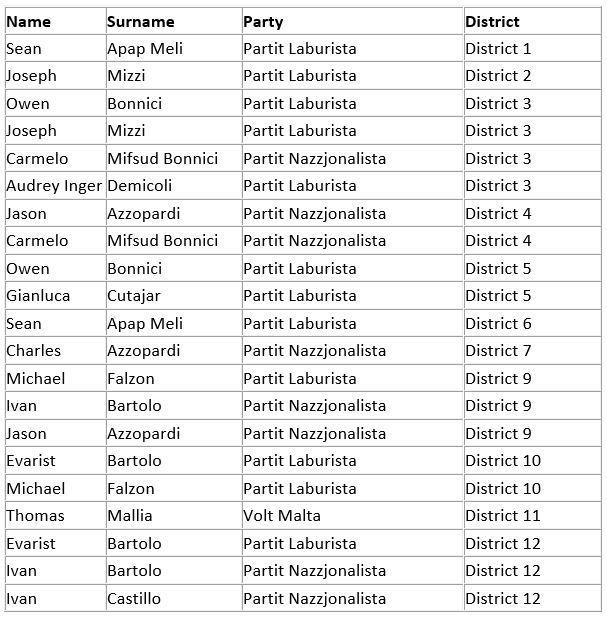 This is the list of those who submitted their candidature on the first day of nominations. Table: Electoral Commission

9.30am The teachers’ union this morning welcomed politicians’ pledge to improve educators’ work conditions, however, it is urging them to keep up their praise after March 26.

Grech definitely started off the day on a good note when he saw he had amassed over 1,600 likes overnight for his comeback to the ‘Inti gamer?’ question on the meme group Malta Pastizziposting Ir-Raba.

The PN leader’s “Ijja bro”, accompanied by a photo of himself with a game controller in hand and another photo of him in action, earned him a seal of approval by one of the Facebook page’s administrators and followers. 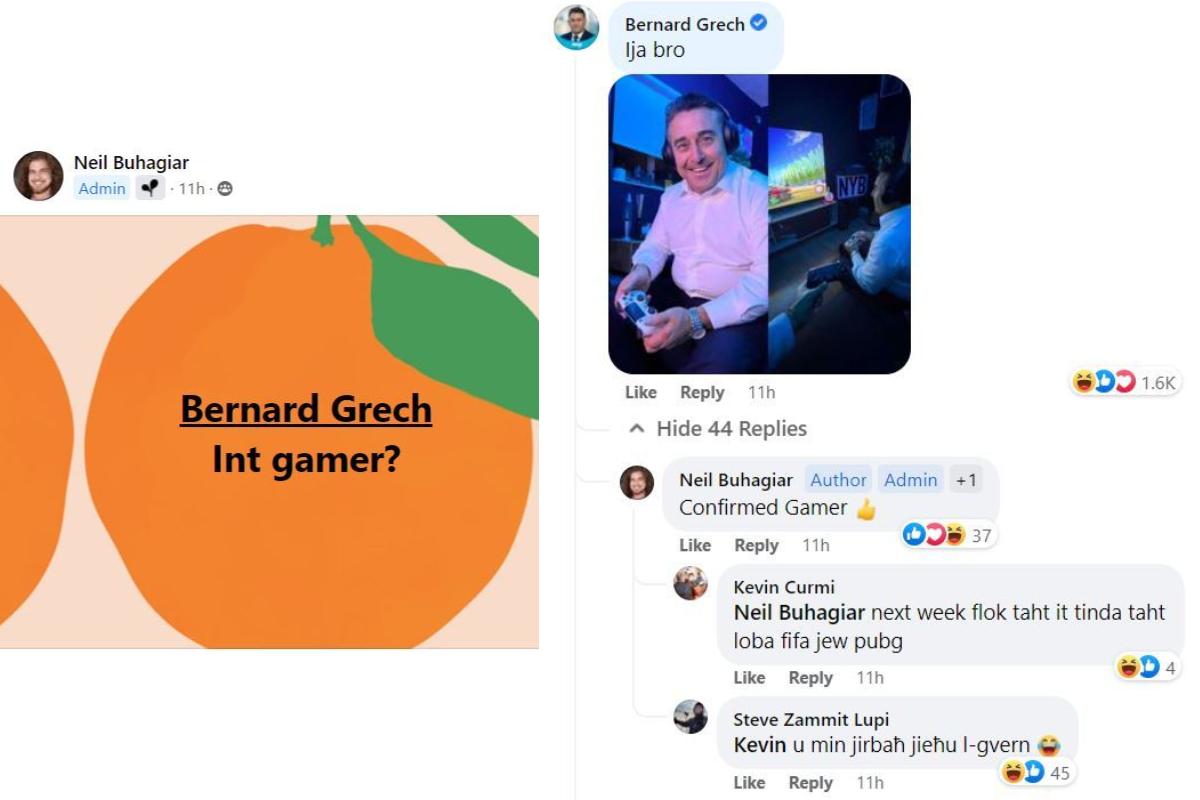 A look at today’s agenda

8.30am Good morning and welcome to our live blog on the eleventh day of the electoral campaign.

Today’s schedule kicks off with the launch of the Malta Employers’ Association memorandum to political parties about economic sustainability, governance and wellbeing. We’ll provide you with a summary later this morning.

At 11am the PN has scheduled a meeting with the Chamber of Commerce. We’re not yet informed of any PL conference.

We do know however that both major parties have planned events for tonight. Bernard Grech will head to Misraħ il-Kebbies in Santa Venera at 5pm, then Triq Sir Ugo Mifsud in Lija, and finally to Qormi, where he will address party supporters at 6pm at the Kortil tal-Granmastru.

Robert Abela will meanwhile address a PL activity in St Julian’s (parking lot in front of Tigullio) at 8pm.

Independent journalism costs money. Support Times of Malta for the price of a coffee.