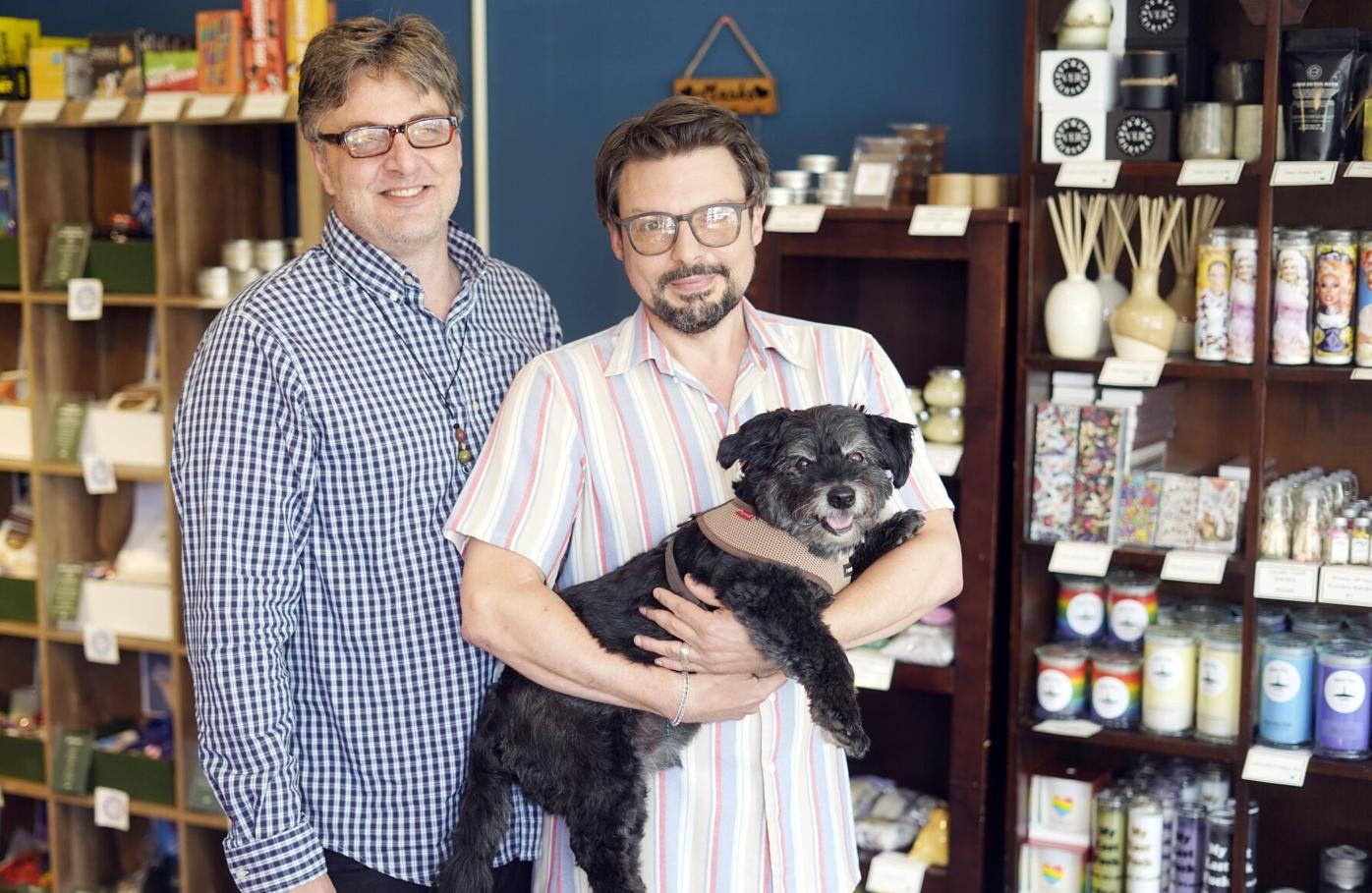 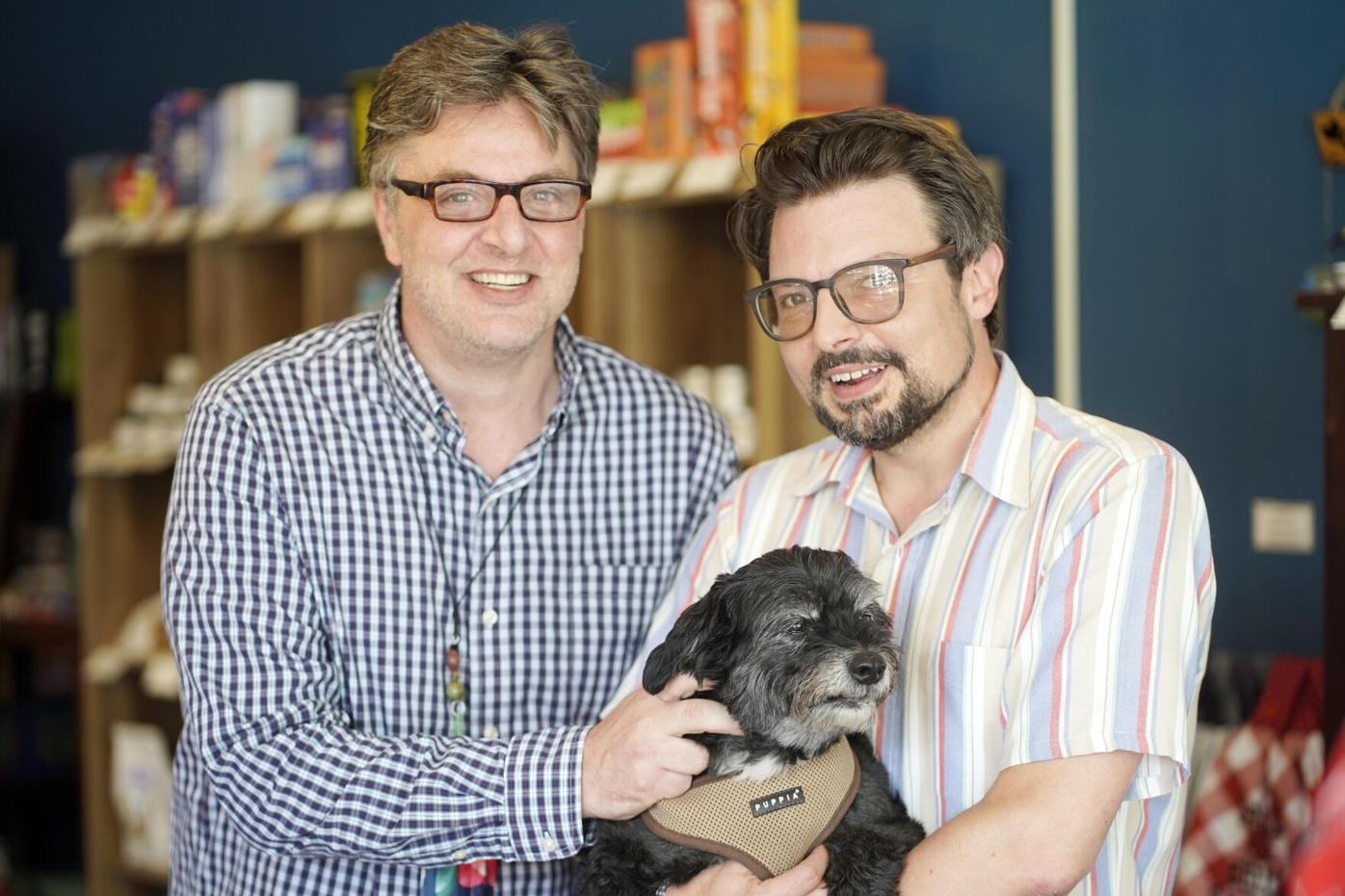 Oskar Hallig and Mike Zippel, owners of Only In My Dreams Events, opened The Shop by Only in My Dream Events in Egremont last year. On Aug. 21, they are celebrating its one-year anniversary. 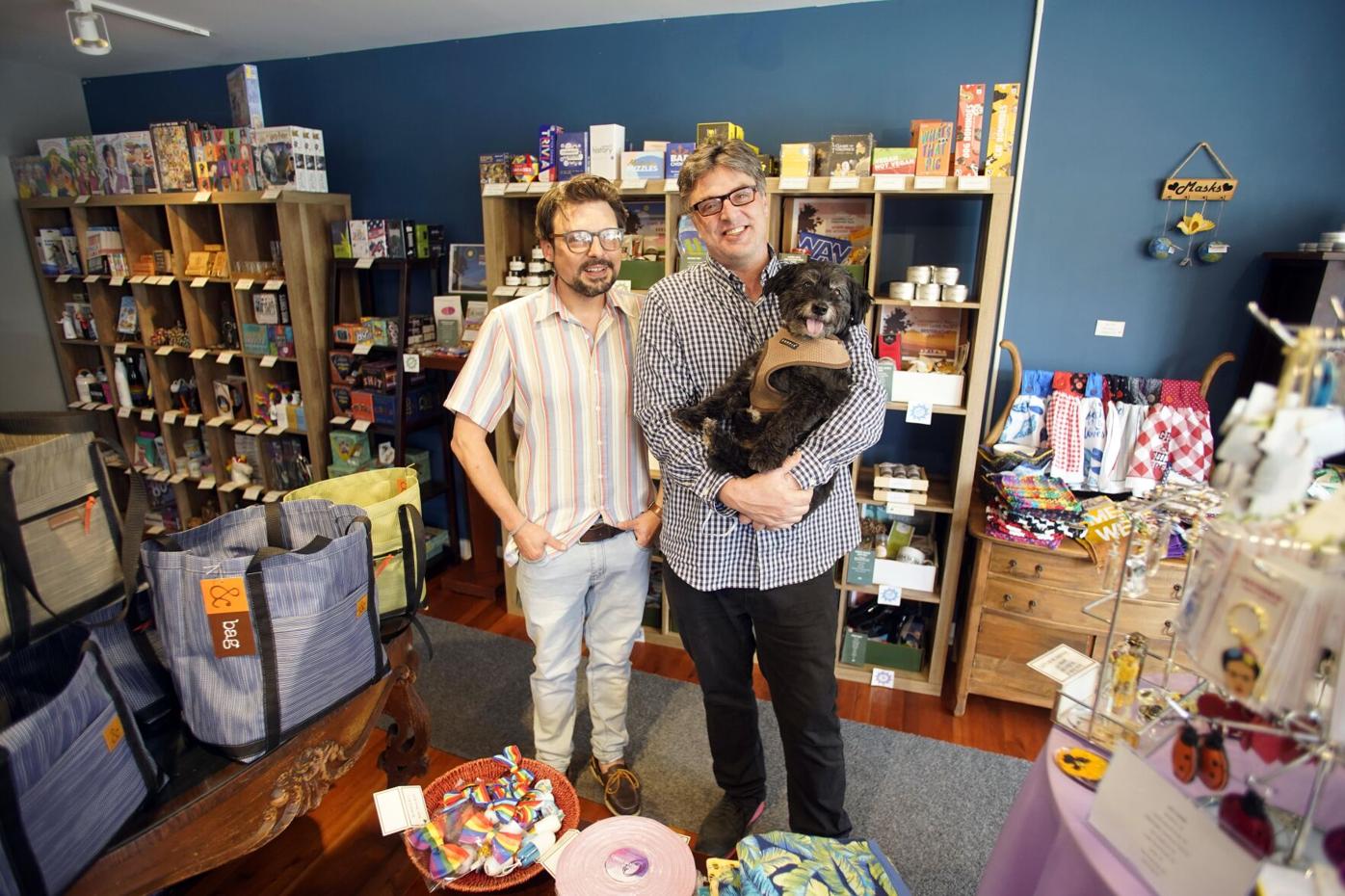 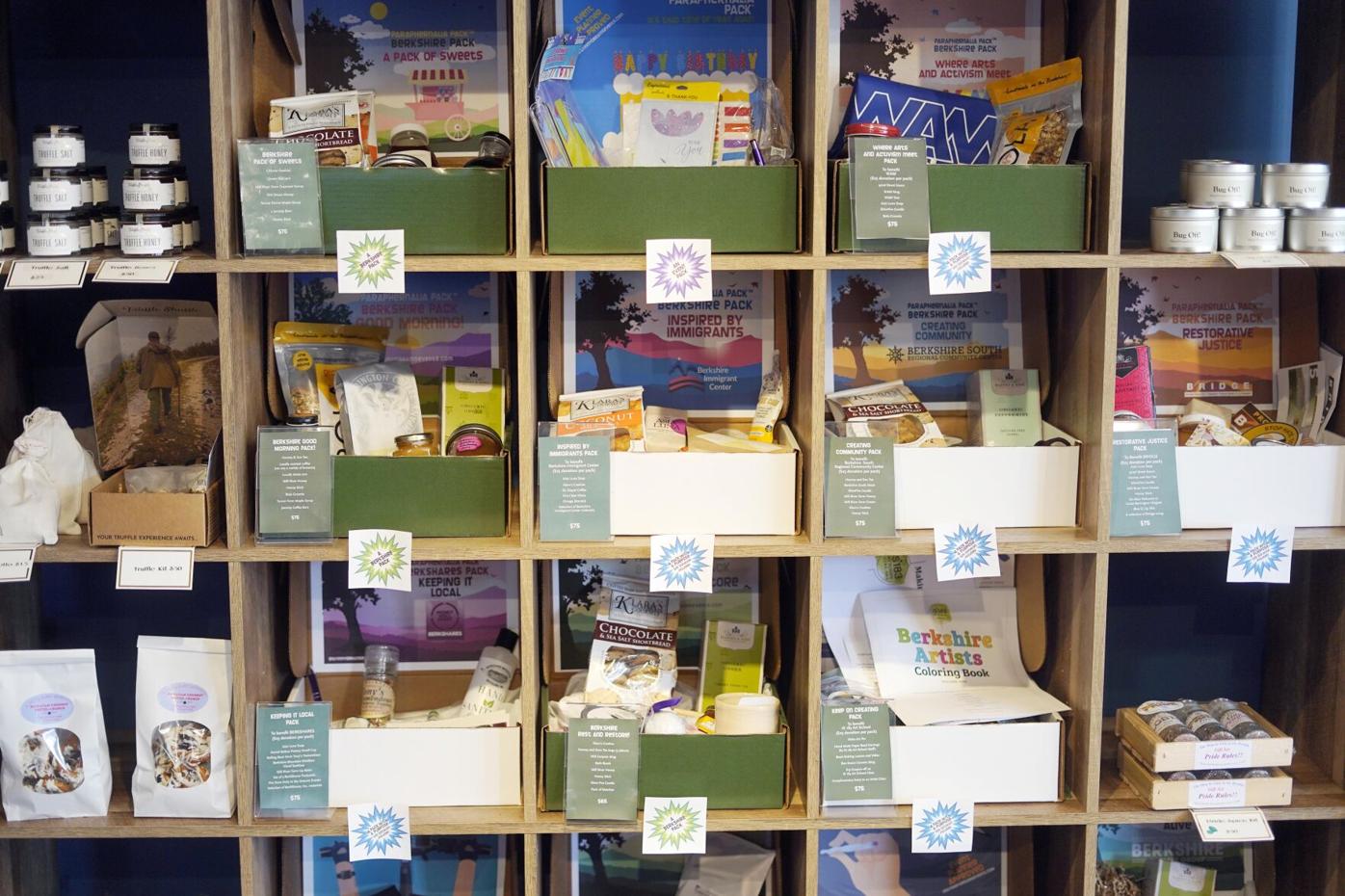 Berkshire Packs, themed boxes filled with Berkshire-made items are on display at The Shop by Only In My Dream Events in Egremont. 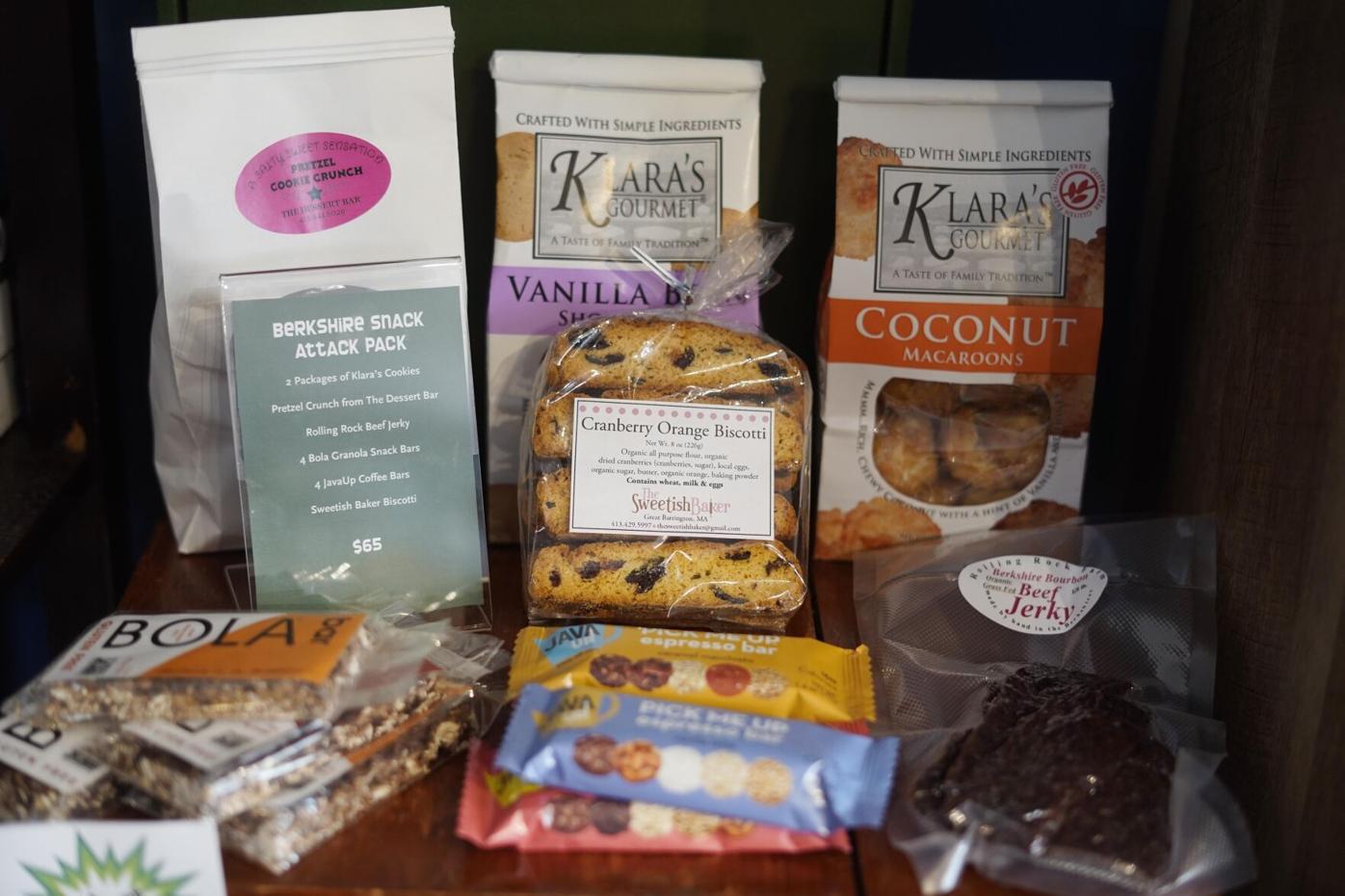 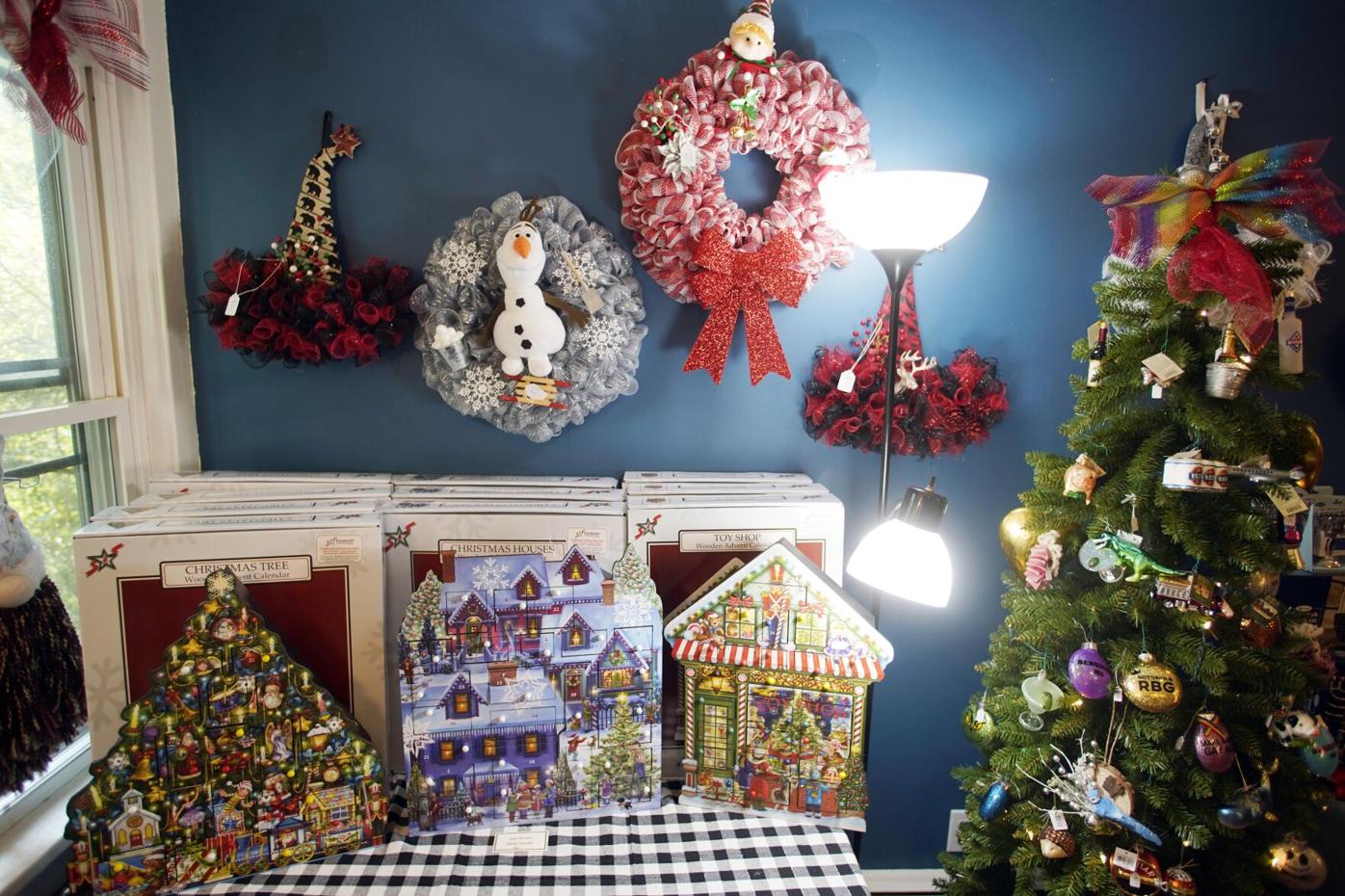 One of the rooms at The Shop by Only In My Dreams Events features holiday decorations year-round. 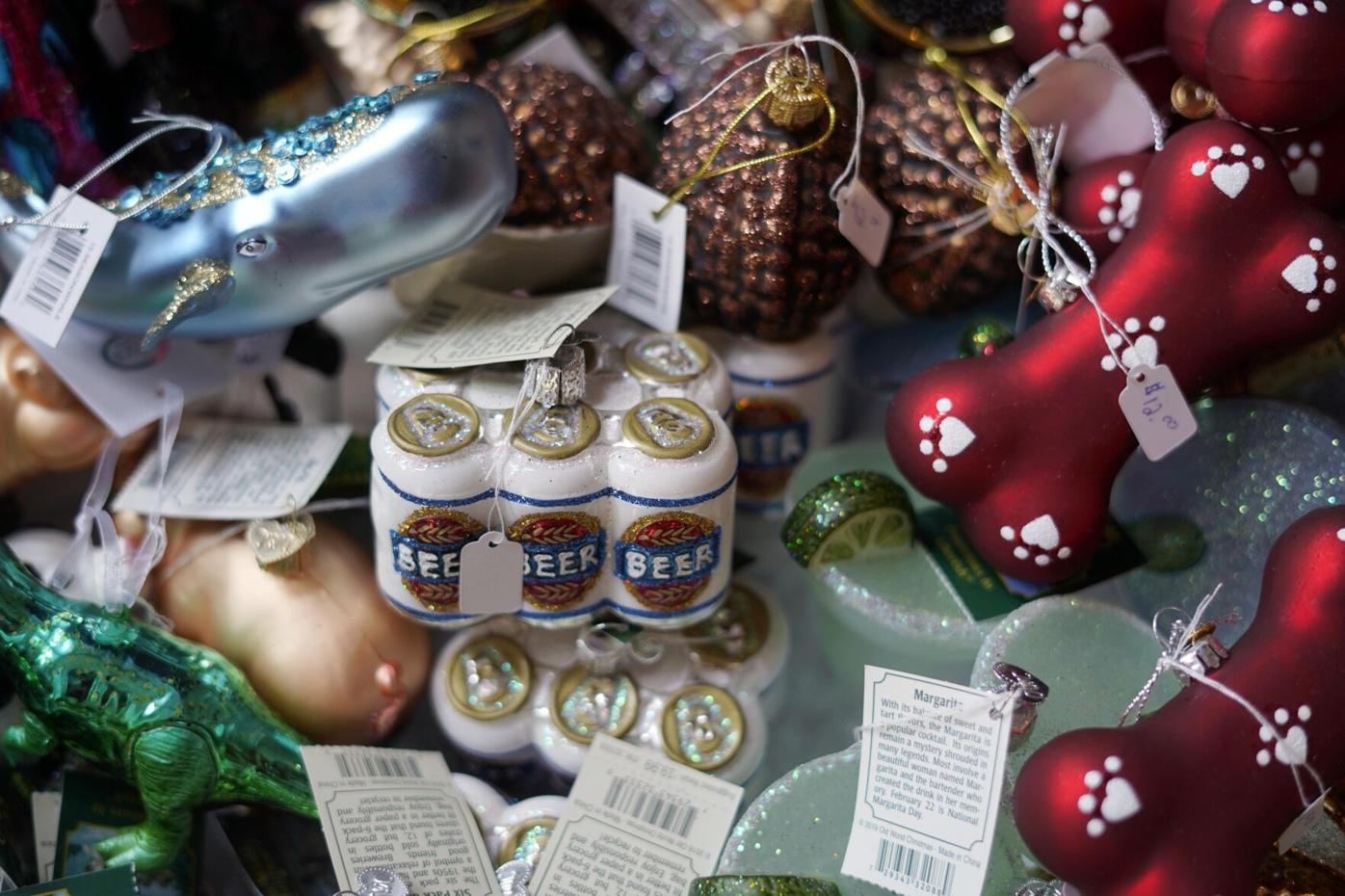 One of the rooms of The Shop by Only In My Dreams Events features holiday decorations year-round and features items such as this collection of glass ornaments. 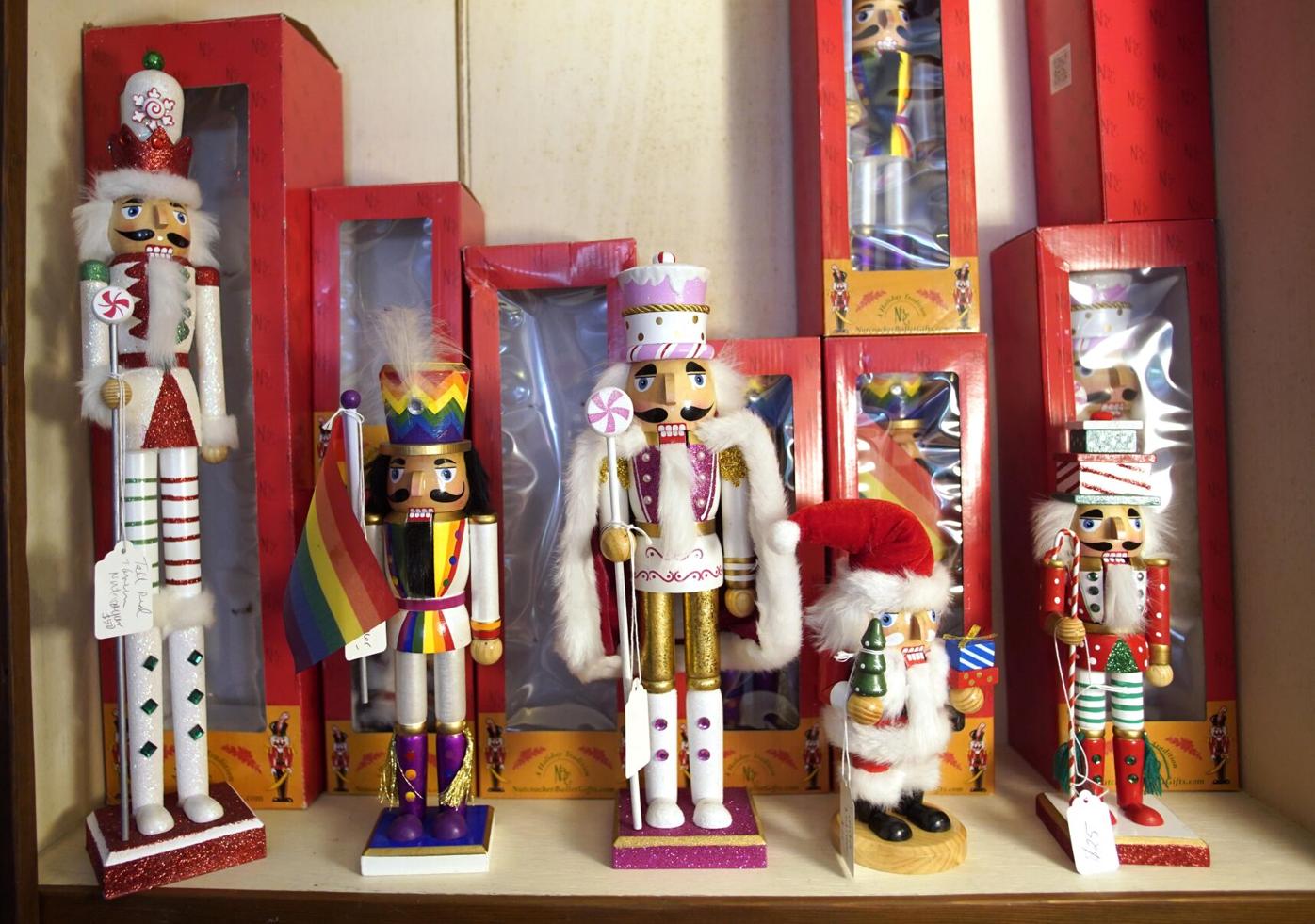 One of the rooms of The Shop by Only In My Dreams Events features holiday decorations year-round, including a collection of nutcrackers. 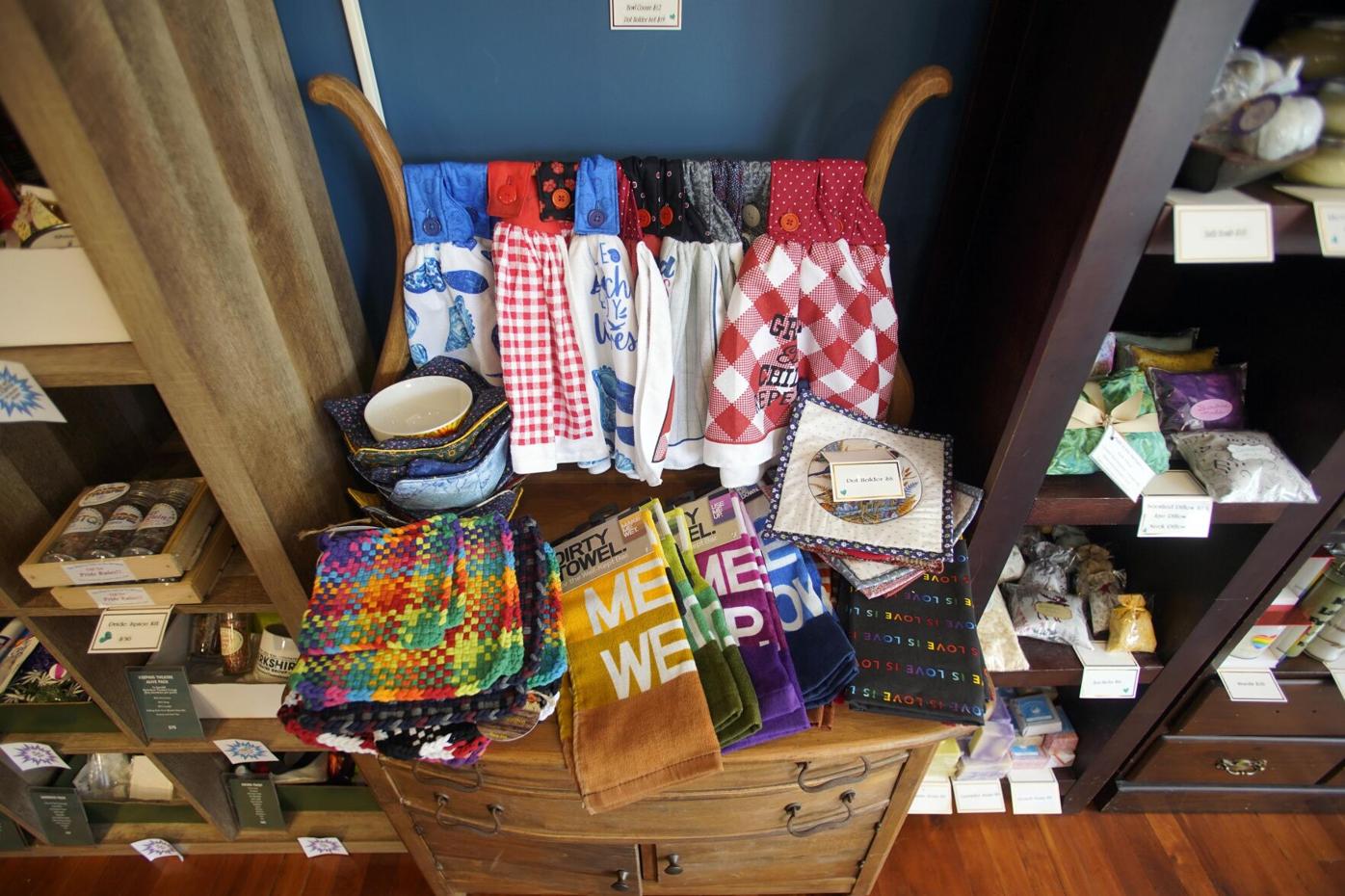 O Aug. 21, The Shop by Only In My Dreams Events hosts a one-anniversary celebration featuring products made by local Berkshires artisans. 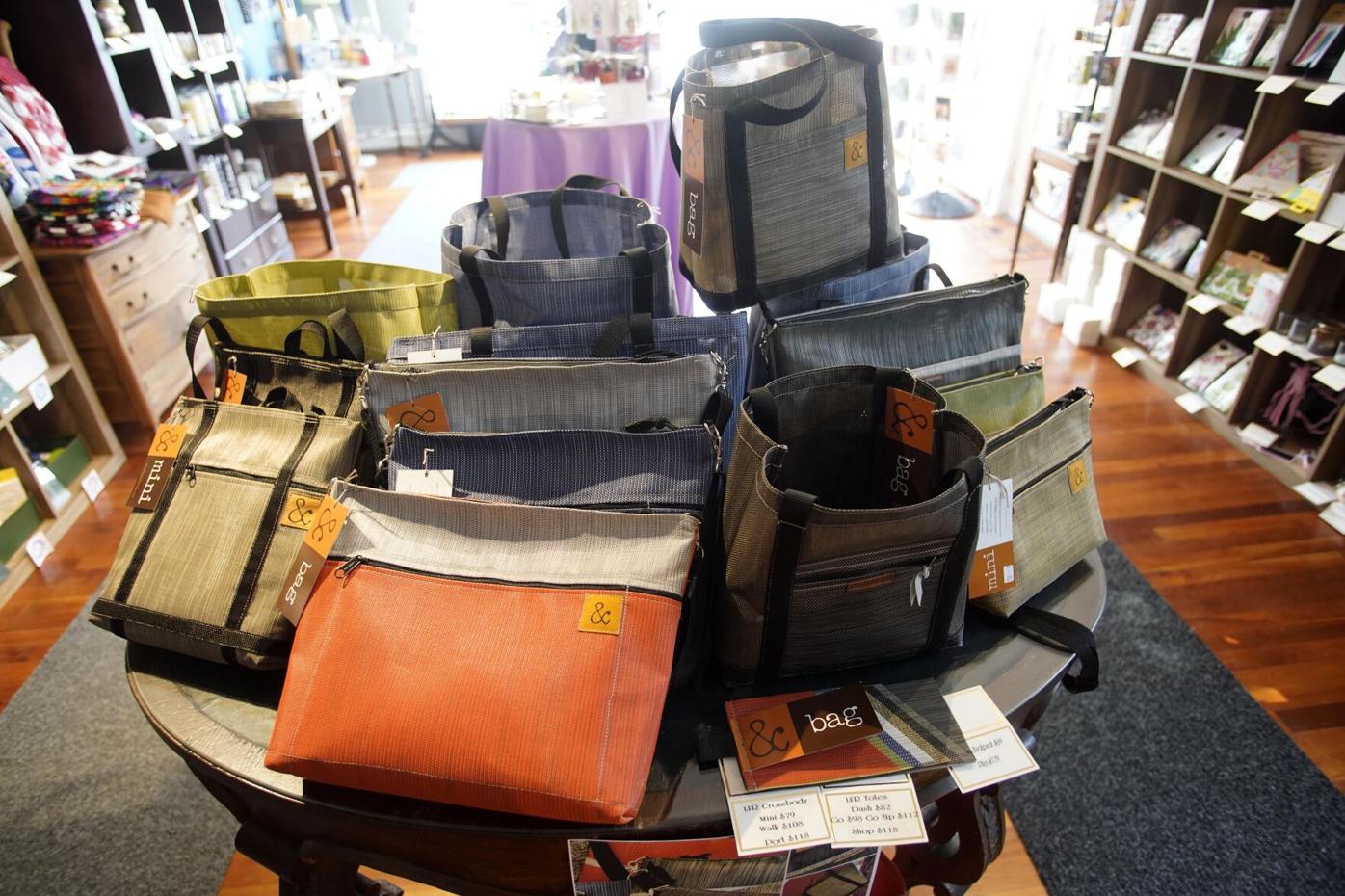 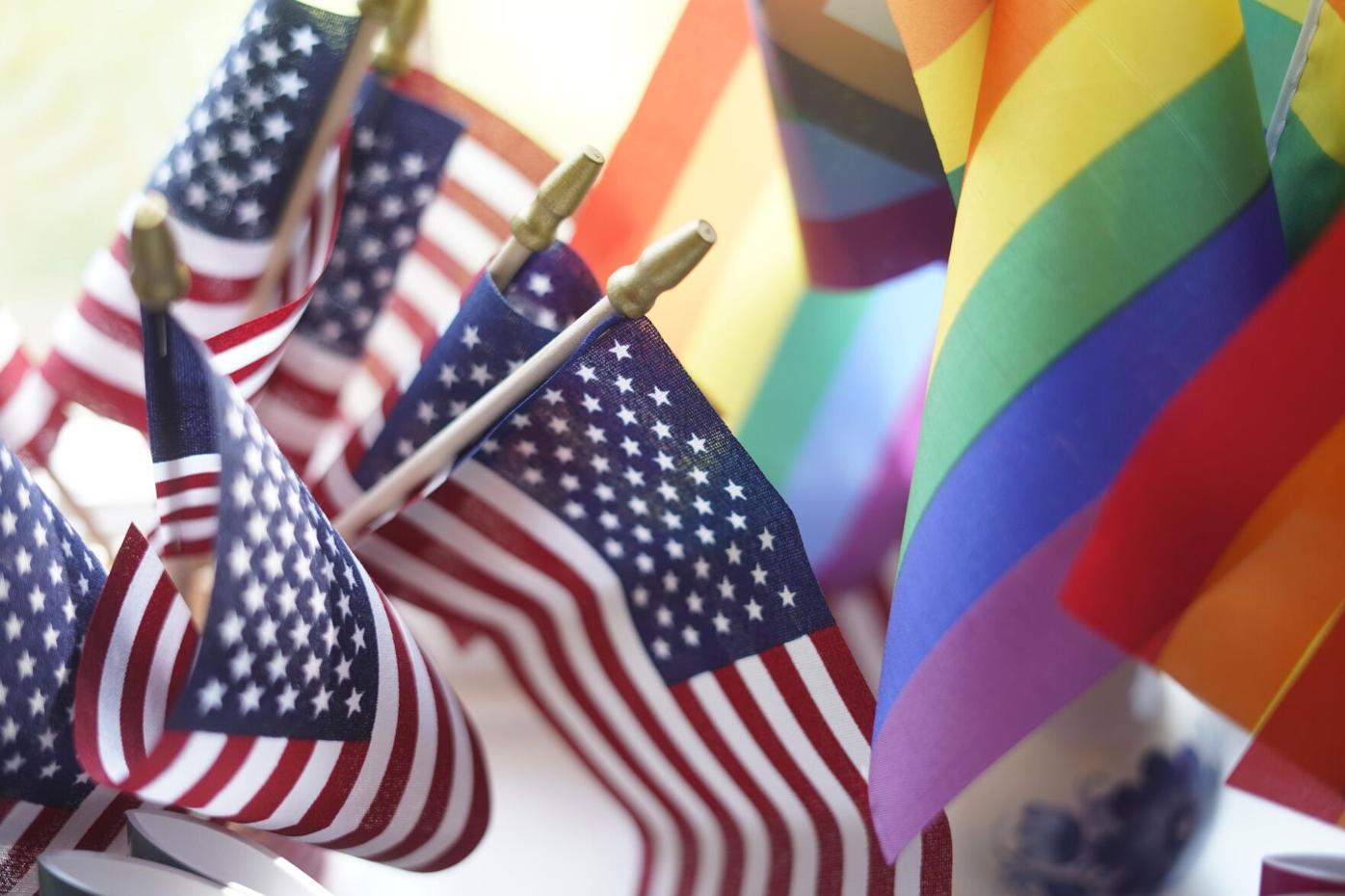 The Shop by  Only In My Dreams Events, in Egremont, has an endless supply of trinkets for shoppers to explore. 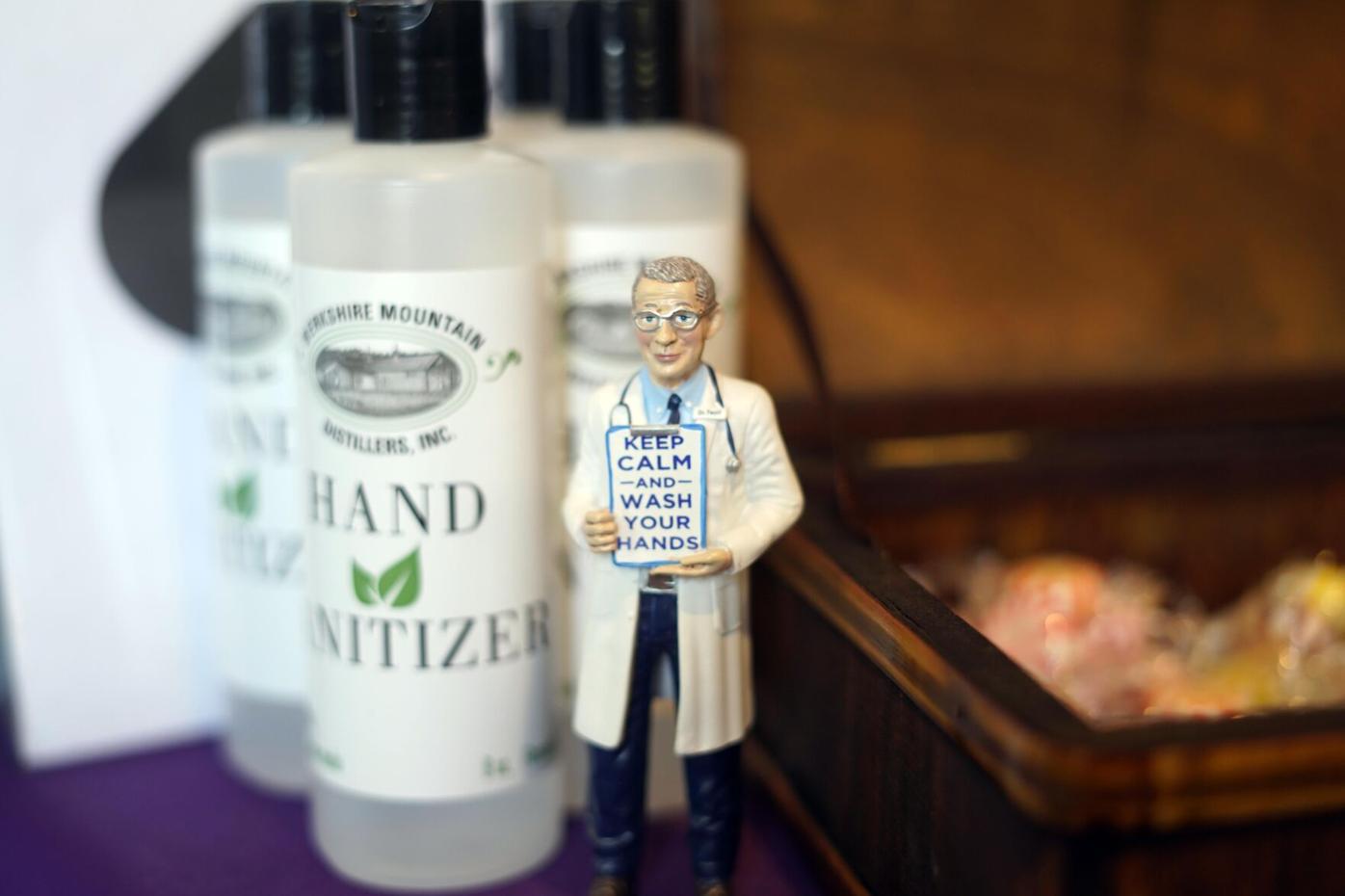 The Shop Only In My Dreams Events, in Egremont, has an endless supply of  trinkets for a shopper to explore, including this miniature Dr. Fauci seen near some Berkshire Mountain Distillers hand sanitizer.

EGREMONT — As a boy in nearby Mount Washington, living in a home surrounded by natural beauty, Oskar Hallig recalls he would invite his childhood friends over. They would want to explore Bash Bish Falls and beyond, but he, instead, would want to retire to the basement of his parents’ house to play “school” (he’d be the instructor) or “store” (he’d be the shopkeeper, “selling” anything that wasn’t nailed down).

Hallig would eventually teach business classes for 11 years at Berkshire Community College. And on Saturday, Aug. 21, he and his business partner and spouse, Mike Zippel, will celebrate the one-year anniversary of the opening of their gift and event store, The Shop by Only In My Dreams Events.

Still playful, still imaginative, Hallig shares the title of the make-believe autobiography running through his mind these days: “Shopkeeping in the Time of COVID.”

Yes, it’s been a challenging year. But it’s also been reassuring, he says. After all, The Shop was designed to spotlight products made by Berkshire artisans, and in many ways the timing of its opening couldn’t have been better. Hallig says COVID-weary consumers, for whom in-person shopping has become a joyful event, have been incredibly supportive of the endeavor.

But even before in-person shopping resumed, he and Zippel cleverly pivoted to prime consumer interest in local goods. They assembled what they call Berkshire Packs, gift-packs that can be shipped anywhere. The packs feature locally made goods, including coffee, maple syrup, candles and snack foods, with a portion of sales of some of the packs donated to local nonprofits.

Sales soared. The success got them to where they are today: still standing.

Located at 45 Main St. in the village of South Egremont, The Shop, a certified member of the National LGBT Chamber of Commerce, will celebrate one year in business 11 to 6 p.m. Saturday, with raffles, giveaways and discounts.

“The more we can ride this wave of supporting local,” Hallig says, “the healthier and happier we’ll be as a community. We’re just trying to get people to see all the good stuff made around here.”

As a walk around The Shop can attest, the good stuff includes leather art by Liz Onley Functional Art in Egremont; handbags by Lineflax & Roving in Housatonic; Lisa Ecklund’s Egremont-based jams; palate-pleasing products from Rolling Rock Farm in Sheffield; woven pot holders made by Laurie Warner, also from Egremont; paintings by Mary Carol Rudin and drawings and poetry books by Geoffrey Young, both from Great Barrington; greeting cards by Diane Firtell, a Pittsfield mixed-media artist; treats from The Dessert Bar in Pittsfield; ceramics, candles and beauty products from Veronica Martin Design of Great Barrington; photographic souvenirs from Apple Hill Designs in South Egremont; and decals, magnets and signs from Sign Barn of Sheffield in the Berkshires, among others.

Born in Germany, Hallig is the son of Klaus and Bobbie Hallig. His father, who died in 2013, worked in television programming distribution and was an Emmy-winning producer of Leonard Bernstein films. His mother is a well-known supporter of local nonprofits and a champion of environmental causes.

Oskar attended schools in Great Barrington and in Northfield. He would eventually earn a bachelor’s degree in comparative literature from Fordham University and a master’s in nonprofit management and urban policy from The New School.

Then, he traveled the world.

In Germany, he met Zippel, a native German, who was working as a flight attendant. The two eventually settled in the Berkshires, at first to run Hilltop House, a B&B in Mount Washington, and then working various jobs, including with the local cosmetic company Jane Iredale.

Then, in 2013, an event occurred that changed everything for them: their wedding. They planned it. They held it at the Colonial Theatre in Pittsfield. It was a bash, over-the-top, 250 people, seamless.

“Instead of a playbill, we had a gaybill,” Hallig says. “Instead of the bios in the program, we had black-and-white headshots of our guests who shared how they knew us. We had the big curtain. It was insane.”

Then came the reviews.

“Everyone kept saying to me, ‘Why aren’t you doing this professionally? This is obviously something you’re good at,’” Hallig recalls.

Having just lost his father to cancer, the timing felt appropriate to, as he puts it, “take a sharp left” in his life. He and Zippel started their event planning company, Only In My Dreams Events, in January 2014.

“Everything was great until, I don’t know: March of 2020?” Hallig says. “Something weird happened, you may recall.”

Every event they had booked was postponed or cancelled due to the pandemic.

He and Zippel began reaching out to friends who “make stuff,” he says. They bought a whole bunch of it and then began assembling and advertising Berkshire Packs, geared as gifts to send to people who couldn’t make it to the Berkshires due to the pandemic or people here in lockdown who wished to avoid in-person shopping.

Such packs were not new to them. In their events business, they had begun to assemble “emergency” packs for weddings and parties. For instance, the birthday box comes with a “happy birthday” banner, streamers, balloons, cake cutter, matches and candles.

The Berkshire Packs, which cost from $75-$100, are available in several lines.

Among the packs for which a portion of the proceeds supports local non-profits, there’s the Empowering Our Youth Pack, supporting Railroad Street Youth Project in Great Barrington. The Restorative Justice Berkshire Pack supports BRIDGE (Berkshire Resources for Integration of Diverse Groups through Education).

The packs have been huge sellers. The store has been busy. The events planning has been picking up, though Hallig is keeping his fingers crossed that COVID doesn’t come roaring back.