This is my first link
This is my second link
This is my third link
From right  Jeff Bezos, Wally Funk and the other passengers on the Blue Origin shuttle wore specialized Omega Speedmaster Moonwatch timepieces conspicuously on top of their jumpsuit sleeves.  AFP

Jeff Bezos’ Blue Origin mission on July 20 wasn’t just a landmark event in private space travel. It was also a shrewd marketing opportunity for one of the world’s top high-end watch makers.

As Mr. Bezos posed for pictures and chatted with CNN reporters following the launch, he had a shimmering Omega wristwatch strapped conspicuously on the exterior of his jumpsuit.

Through a representative, the Swiss luxury watch brand confirmed that Blue Origin outfitted Mr. Bezos, his brother Mark Bezos, pilot Wally Funk and Dutch student Oliver Daeman with the customized stainless steel Speedmaster Moonwatch chronograph wristwatches, but it would not say whether the watches were gifted or purchased by the company.

Regardless of their origin, the Blue Origin crew’s watches proved to be a publicity boon for Omega.

Google Trends, the search engine’s in house measurement of interest, showed a big spike in searches of “Bezos Watch” and ” Jeff Bezos Watch” on the morning of the Blue Origin’s launch.

In a sign that at least some keen-eyed watch aficionados were watching the proceedings, Google Trends also showed a healthy number of searches for the more specific “Jeff Bezos Omega.”

On July 20, Hodinkee, a watch publication beloved by horological nerds, ran an online story about the crew’s Omegas, which became the site’s most read story that day, said Danny Milton the article’s author.

Mr. Milton noted that the publication saw similar traffic when it correctly identified the Rolex worn by president Joe Biden at his inauguration.

Omega has a longstanding affiliation with space travel, dating back to 1962 when Nasa astronaut Walter Schirra wore an Omega Speedmaster into space. But thanks to the wall-to-wall coverage of Mr. Bezos’s Blue Origin launch, Omega’s public moment was closer in spirit to its associations with Hollywood. 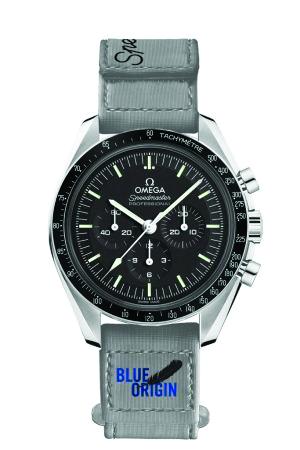 The Blue Origin Omegas were customized with branded Velcro straps.

For one morning at least, Mr. Bezos found himself in this crowd, with viewers wondering “what is that shiny watch?” Unfortunately, these specialized Speedmasters which featured Blue Origin branded velcro straps and were engraved with the wearer’s name, flight number and the space company’s feather logo are not available for sale. A classic all-steel Moonwatch retails for $6,300.

Not all the comments about Mr. Bezos’s watch were about the watch itself. Many viewers noted with curiosity that the Amazon founder had strapped his watch on the exterior of his jumpsuit.

On Twitter, countless users also commented on Mr. Bezos’s curled cowboy hat, which made the tech titan look as if he was about to enter a rodeo, not board a rocket ship.

This watch-on-the-outside move called to mind Gianni Agnelli, the late, incomparably-stylish president of Fiat, who famously clamped his big-face wrist watches over his pressed dress shirt cuffs. Mr. Agnelli — who was at one point the richest man in Italy — had his shirts tailored so tightly at the cuffs that his beefy watches simply wouldn’t fit underneath.

Some viewers speculated that Mr. Bezos velcroed his watch on the outside as a way of flexing his vast wealth.

But historically astronauts do tend to wear their wristwatches on the outside of their spacesuits for maximum legibility.

Past photos of Mr. Aldrin, Jim Lovell and other Apollo astronauts show their timepieces strapped around the marshmellowy sleeves of their spacesuits. In this regard, Mr. Bezos was again just keeping with tradition.