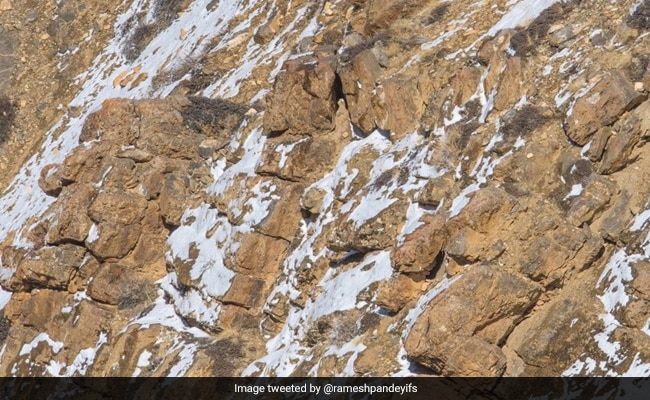 There’s a snow leopard in this photograph. Can you see it?

Nature is a gift that keeps on giving. Now, thanks to the internet, we have the opportunity to explore facets of our environment, flora and fauna that we would not have been exposed to otherwise. The latest on the list of such popular nature posts is an image of a snow leopard that has users hooked. The image, which has now gone viral on Twitter, features the wildcat camouflaging itself amid a mountainous terrain, capped with snow. It would be an understatement to say that it is difficult to spot the leopard in the image.

Twitter users got a good look at the image when it was shared by IFS Officer Ramesh Pandey who asked his followers if they could locate the animal. He went on to call the snow leopard a “phantom cat” and “ghost of the mountains”, given its ability to blend in with its surroundings. This makes it almost impossible to detect the leopard at first glance. However, it took Twitter users way more than just a glance to spot the elusive animal in the image.

Sharing the photo and tagging the photographer, Mr Pandey tweeted, “Phantom cat….! They are called ghost of the mountains. If you can locate.”

Phantom cat….!They are called ghost of the mountains.
If you can locate. @ryancragunpic.twitter.com/sG5nMyqM0S

The photo was originally captured by Ryan Cragun, a resident of Utah on the micro-blogging platform. “Snow leopard doing a descent,” Mr Cragun wrote along with the image.

What followed next was users diligently putting in efforts to locate the big cat. And, needless to say, it was far tougher than most imagined.

Many admitted defeat and gave credit where it was due, describing the animal to be a master at camouflaging.

One user, who goes by the name Enrique admitted that he had to zoom in several times before spotting it.

My gawd I could barely locate it. I had to expand the pic several times.

Akash Rawat felt that spotting the animal was “tougher” than his “board exam”.

“But what a great disguise,” said a user named Ishita, after identifying the animal, though it “took some time”.

Found it, took some time. But what a great disguise ????

Sarthak Sahani described the picture to be “mind blogging”, confessing that he could not find the leopard.

“Had to look for help in the replies at the end!” confessed one user.

To he honest, I’ve been looking for a few minutes now, zooming the photo in & out! Had to look for help in the replies at the end! ????️???? https://t.co/k9UgRxQAcm

However, there were some keen observers who were able to locate the animal.

It’s hard to locate, such a deadly cat…..@rameshpandeyifshttps://t.co/KY7nddhARupic.twitter.com/bbmBXuf8H0

It is in this location it’s visible ????????️ pic.twitter.com/FjglLQrHQn

Interestingly, some claimed to have spotted more than one snow leopard in the said picture.

Actually there are 2 snow leopard. pic.twitter.com/hT0pIvxz6O

Tell us whether you were able to spot the animal or needed help like many of us to locate it.