Anand Mahindra, a business tycoon, took to micro-blogging site Twitter and shared a beautiful location from the country which mesmerised netizens. 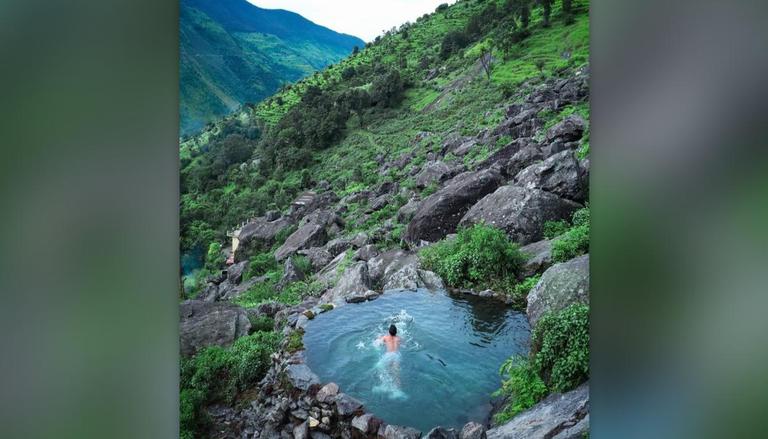 Anand Mahindra, a business tycoon, took to micro-blogging site Twitter and shared a beautiful location from the country. Mahindra is known for sharing several unknown and beautiful places and his latest tweet, which includes a beautiful natural pool, is no exception. He shared the message, which was first written by Twitter user Siddharth Bakaria.

Whaaaat?? I’ve never seen anything like this. This HAS to go in my travel bucket list as the ultimate swimming experience. Where exactly is this @Sidbakaria ? Need GPS coordinates! https://t.co/lfOciyiCyQ

The post, which was shared on Tuesay, July 6, has received over 6.8K likes and 526 retweets as of now. The stunning natural swimming pool left netizens speechless. While many people inquired about the pool’s location, others remarked on how clean the water appeared. Some even shared more beautiful locations.

Originally the post was shared on May 30 by Siddharth Bakaria who is the President of the Sahyog Foundation. He was inquired by Mahindra about the mesmerising sight of the unique swimming pool. The natural swimming pool is reportedly located in Khela village, Dharchula, close to the India-Nepal border. Dharchula is a town in Uttarakhand’s Pithoragarh district. It is situated at a height of 940 metres above sea level.

This summer has been particularly difficult for us. First, we were stranded in our homes due to mandatory lockdowns established in response to an increase in coronavirus cases in the second wave of the pandemic. Then, as the temperature rose, we felt compelled to flee to the mountains. This image would certainly have brought some smiles to people’s faces and gave an interesting travel idea.

Recently, Mahindra shared a video of a biker seeing a pack of bears that went popular online. He also added a witty caption, suggesting that those stuck in situations like these have a ‘Bear Charging’ indicator. In the caption, he mentioned his partner brand, Jawa, a motorbike manufacturer.

In the video, the biker was seen driving down the beautiful route before spotting a troop of bears at one of the bends. He then came to a halt and attempts to capture the bears on video, zooming in to get a better look at them. One of those bears, however, notices him and charges at him. It’s obvious that Anand Mahindra likes to explore new things and his tweets prove just that.

Get the latest entertainment news from India & around the world. Now follow your favourite television celebs and telly updates. Republic World is your one-stop destination for trending Bollywood news. Tune in today to stay updated with all the latest news and headlines from the world of entertainment.