Ad-tech stocks have boomed during the pandemic as ad spending has shifted to digital channels, and Perion Network (NASDAQ:PERI) is among the big winners.

The Israeli company provides an intelligent hub that connects publishers like Newsweek with brands like DraftKings and offers premium ads with customizable content and interactive technology. For example, Perion’s connected-TV ads can include QR codes that allow viewers to click directly to buy a product they see advertised on screen.

Year to date, the stock has more than doubled, and it skyrocketed following its third-quarter earnings, jumping 31%, after the company smashed expectations. Revenue jumped 45% to $121 million, ahead of the consensus at $109 million, and adjusted earnings per share doubled to $0.40, compared to estimates at just $0.17.

That’s become a pattern for Perion and a big part of the reason the stock has soared during the pandemic. The company even raised its outlook for both 2021 and 2022. Let’s look at a few reasons the company keeps blowing past expectations. 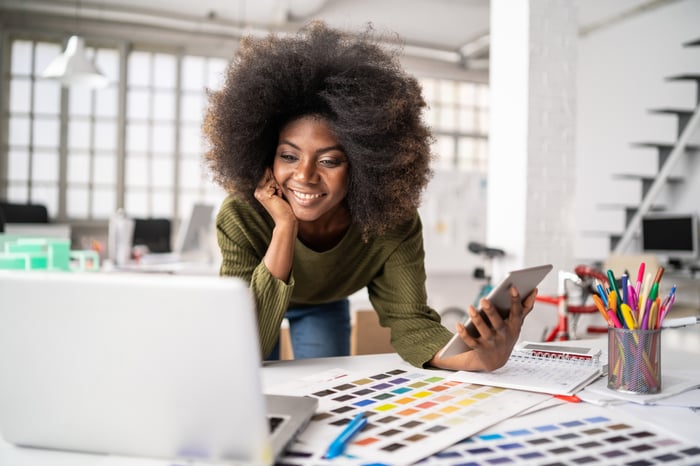 In an interview with The Motley Fool, CEO Doron Gerstel noted that Perion’s growth isn’t happening inside a vacuum. It’s occurring in an industry that is benefiting from pandemic and tech-related trends like an increase in e-commerce and video streaming, which is driving a boom in connected TV (CTV), or ad-driven video streaming.

Perion’s video and CTV revenue jumped 245% in the quarter to $14 million. Growth in CTV is strong almost across the board among ad tech stocks, but Perion’s focus on premium ad experiences and interactive content has given it an edge and helped drive spending per client up from $78,000 to $102,000.

The company also noted on the earnings call that the industry growth forecast remains strong, with compound average growth of 14% expected through 2024, though the company expects to exceed that. For 2022, it’s calling for 28% revenue growth to $580 million to $600 million.

The company is gaining leverage

Most ad tech companies focus on either the demand side (the brands) or the supply side (the publishers). However, Perion has carved out its own space in the industry, buying ad inventory in search, display, and video, and connecting content publishers with brand advertisers.

It calls its model the intelligent hub, and it’s delivered strong growth in both customer spend and new customers. The intelligent hub is also scalable, and the company is gaining leverage as it grows. Adjusted margins based on EBITDA (earnings before interest, taxes, depreciation, and amortization) excluding traffic acquisition costs increased from 26% to 37%. Much of the cost of running the intelligent hub are fixed, and the company has been investing in automation to make it more valuable for customers. So when average revenue per client increases, as it did in the third quarter, much of that additional revenue is high-margin because the incremental costs to deliver it are minimal.

For 2022, guidance called for EBITDA margin to remain steady at 34%, excluding traffic acquisition costs. But management said it wanted to be conservative with its guidance and that it was stepping up investments in technology after seeing positive results from SORT, its new artificial-intelligence based technology that allows for cookie-less targeting.

Digital advertising got whacked by Apple’s recent ad tracking transparency (ATT) initiative, which asks iOS users to opt into ad tracking, and social media platforms like Snap and Facebook pointed to ATT as a major reason for a slowdown in revenue growth in the second half of this year.

But Perion’s third-quarter results show the company’s business was essentially immune to Apple’s new privacy protocol. Search advertising, which made up 43% of Perion’s revenue, is unaffected by Apple’s new rules, and of the 57% of revenue from display advertising, only a third of that comes from smartphones and 90% of that is from Android. That means just 2% of the company’s overall revenue is affected by the changes to iOS, essentially making it irrelevant.

That, as well as the strength of SORT and its growth in CTV, insulates the company from privacy-related challenges in the broader digital ad industry.

Following the stock’s post-earnings jump, Perion still looks like a great value, considering its growth and profitability. Based on adjusted EPS for the last four quarters, it trades at a price-to-earnings ratio of just 20 even as the company is calling for 28% revenue growth next year.

It also just acquired Vidazoo, a profitable video technology company that will accelerate its growth in CTV, and the broader industry tailwinds it’s enjoying seem set to continue. If the company can deliver on its guidance for 2022 or exceed it, the stock could move a lot higher from here.