Electric car sales doubled in 2021, driven by favorable government policies, rising consumer interest, and a proactive automotive industry ready for change. Regardless of which automakers fare best at grabbing market share in this segment, investors could benefit over the long term from holding shares in the companies that will power those vehicles.

ChargePoint Holdings (NYSE:CHPT), EVgo (NASDAQ:EVGO), and Volta (NYSE:VLTA) all focus on the infrastructure and production of EV charging stations. Each has seen its stock price take a beating over the past two years due to supply pressures, a broader tech sector decline, and their difficulties with generating profits. But a turnaround could be in the offing, making them good long-term investment opportunities at a discounted price. 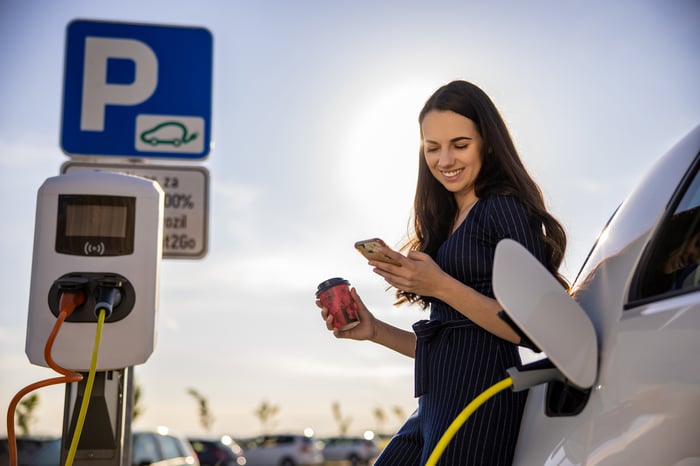 The case for ChargePoint Holdings

ChargePoint operates the largest EV charging network in the world, with over 174,000 charging ports across 15,000 locations in 14 countries, giving it a 65% market share. It’s also No. 1 in the U.S. by a wide margin. The company has actively pursued partnerships with auto manufacturers and leasing companies and made acquisitions to expand its network offerings to a client base that has grown to over 5,000 commercial and fleet customers.

Its stock price has dropped by 63% since December 2020, but the positive fiscal fourth-quarter 2022 results and upbeat outlook management recently delivered may signal the start of a share price rebound. For its fiscal 2022, which ended Jan. 31, revenue increased 65%, driven by momentum in both commercial fleet and residential sales. The top line also outpaced the company’s initial guidance by 21%. In fiscal 2023, ChargePoint anticipates 84% revenue growth, which should lead it to break even on the cash flow metric in fiscal 2024, helped along by growing margins resulting from recurring software subscriptions and a land-and-expand model that generates new customers and builds customer retention.

Sales to commercial fleet operators should continue to rise through its strategic partnerships and its acquisition of ViriCiti, an Amsterdam-based provider of charging solutions and monitoring for electric buses and commercial fleets, which will help expand operations in Europe. However, along with rising revenues will come an increase in operating costs — those are expected to jump 50% this year. That’s been a consistent concern for investors who are eagerly awaiting the time when this company starts to turn a profit.

The question for long-term investors should not be, will ChargePoint be profitable next year, but rather, where will it be five or 10 years from now? That’s the time frame that may be required for this company to deliver profitability. However, analysts’ average 12-month price target for the stock is $25. If those forecasts are accurate, today’s price of $14.40 per share represents a steep discount.

The case for EVgo

EVgo operates a network of fast-charging stations in the U.S., where it doubled its number of chargers during 2021 to 1,595. That growth was supported by a partnership with General Motors, through which it will deploy 3,250 charging stalls by 2025, primarily in the country’s top metropolitan markets.

The company has also forged partnerships with commercial fleet carriers, rideshare operators, and various public retail locations, with the goal of making it easy for people to quickly charge up while doing routine errands. But like ChargePoint, EVgo isn’t turning a profit. In the third quarter of 2021, it had an earnings before interest, taxes, depreciation, and amortization (EBITDA) loss of $14 million, and its cash flow for the first nine months of the year was negative $17.8 million.

As it looks toward the future, EVgo is preparing for growth through more partnerships. For example, it signed a deal with CBL Properties (owner of 100 malls across 24 states) that will bring EVgo’s first charging stations to Kansas, as well as to some of the REIT’s other properties. EVgo has also released EVgo Optima and EVGold, a subscription hardware and software package, and services offering to help fleets transition over to electric vehicles while optimizing performance.

The company’s stock price has declined by 50% since January 2021 for many of the same reasons ChargePoint’s has. But the time may be right for investors to take notice of a rebound. In Q3, total customer accounts increased by 24%, lifting revenue by 29% year over year, driven by improvement in fleet segments. The company also ended the quarter with $500 million in cash — fuel it can use to expand its footprint and perhaps make acquisitions as the market evolves and the number of EVs on the road continues to increase at a dramatic rate. Analysts’ average stock price target on EVgo represents a 16% premium over the current price.

The case for Volta

Volta takes a slightly different approach to the charging business: It equips its stations with large digital screens that display advertising. These provide Volta with an additional source of revenue beyond stall installations and subscriptions. An evolving world of improved artificial intelligence and greater use of data to inform efforts at personal engagement should allow Volta to expand on its partnership opportunities.

The one thing I see as an issue for Volta is that its model requires it to attract and hold viewers’ attention and provide ad messages that get acted on. Take away its advertising niche, and you simply have a network of charging stations — 2,297 in the U.S. — that is smaller than those of many of its competitors. Volta will need to prove that the display ad approach can be effective. So, why might Volta stock be a buy now?

On the plus side, EV owners can have subscriptions to multiple charging station vendors in the same way that many viewers subscribe to more than one streaming service. Volta’s 77% year-over-year revenue growth in Q3 — driven by increased ad sales with national brands — shows that its approach can be successful. However, its EBITDA loss grew by 300%, and revenue from customer installs decreased year over year. The company will need to find ways to gain traction toward profitability.

The real profit for long-term growth investors here may come eventually in the form of Volta being acquired by a larger competitor, but its EBITDA losses could weigh on the chances of that happening. For those willing to take a risk, the stock share price is down by 62% from December 2020. Meanwhile, analysts have remained positive, giving it an average price target of $11.50, reflecting a potential 200% gain over the current price in the neighborhood of $3.80.

Thanks to a $5 billion-per-state allocation from the Biden administration, the number of charging stations in the U.S. should skyrocket to 500,000 over the next five years, helping support the projected 30% compound annual growth rate for charging station companies through 2028.   As that growth takes hold, I think of subscription plans and services offerings, which call to mind the successful models of Amazon, Apple, and Netflix. If the EV market benefits from this approach to charging, it could have a huge impact on revenue in the long term and turn these companies into earnings magnets powered by recurring customer revenue.